Following the initial action taken by Wilmslow Town Council at the start of June 2021, when four floral planters were introduced along Cliff Road to discourage pavement parking, further thought was given to providing a more comprehensive solution.

The problem of pavement parking in this area on sunny days has long been recognised by local residents as being a significant safety hazard to wheelchair and pushchair users in particular as they have needed to go in to the dimly lit road to pass.

The initial preventative measures have broadly been successful with pavement parking in the area protected being eliminated since the introduction of the planters and the section immediately beyond only being used for pavement parking on one occasion since their introduction. Despite this progress however further discussions took place as to what actions should be taken to tackle this problem more comprehensively until more permanent solutions are found.

The additional planters have been provided once again by Wilmslow Town Council at a cost of £1600 and were purchased following a request received from Cheshire East Council to enable the action to be taken without further delay. 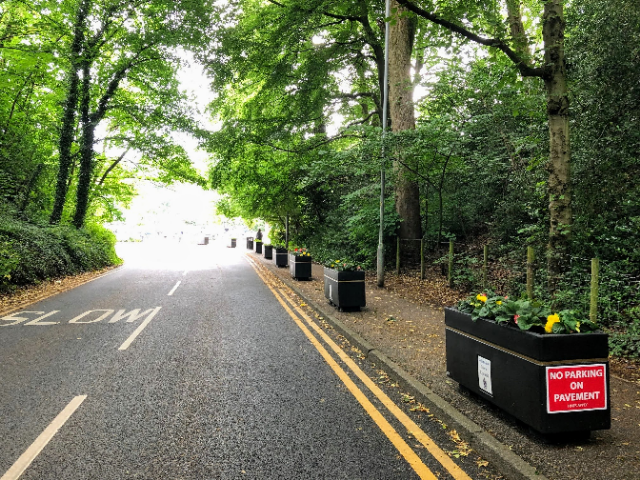 The Town Council is fully aware of the difficulties of maintaining planters in this poorly lit environment but will do their best with their horticulture partners ‘Oak Nurseries’ to provide a display until the highway authority are able to provide a longer- term solution and the planters can be re-sited to better floral effect.

Cllr Martin Watkins, Chairman Wilmslow Town Council said “ This problem has gone on long enough, although it doesn’t have the powers of Cheshire East Council or the Police to act in dealing directly with those causing such difficulties, Wilmslow Town Council has responded positively when asked by Cheshire East Council to take this action on their highway”