Back in the summer, Wilmslow Town Council took direct action in an attempt to end the pavement parking on Cliff Road that served to obstruct pedestrians and, in particular, wheelchair users and parents with pushchairs.

The Town Council took this action as it was the only direct action that it could legitimately take to resolve what is a highways issue and therefore a matter controlled by the principal authority.

In placing planters in this area, it was always known that flowers would struggle to flourish. However, it was disappointing that, after the plants had been systematically pulled out over the summer, the planters themselves have been attacked over each of the last four weeks.

In purchasing and then using planters in this way it was always hoped that this would be a temporary solution and that they would at some stage be moved to a more suitable sunny site where they would flourish and give greater visual benefit.

In light of the ongoing attacks, the lack of public visibility and CCTV coverage in the area and the fact that the pavement parking is primarily a summer issue, the planters have now been moved in to the Town Centre where they will enhance a rather unloved area on Alderley Road at the top of Green Lane (below). The new site is fully protected by CCTV funded by Wilmslow Town Council, and is part of an area highlighted in the Neighbourhood Plan as requiring public realm improvements. 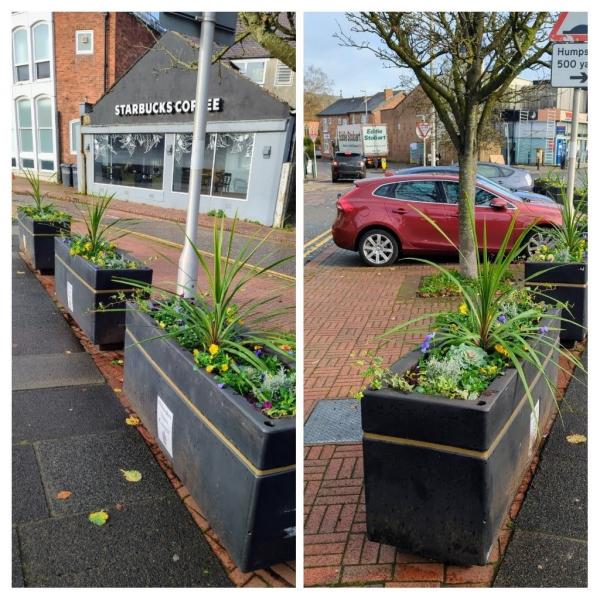 It is hoped that Cheshire East Council will come forward with a plan for Cliff Road ahead of summer 2022 that will permanently end the pavement parking issue, the Town Council will review the location of the planters at the time they are replanted in early June.